Welcome to the final instalment of this crazy cupcake trilogy.  Just a recap for those of you that are new to the blog; I agreed to bake 100 cupcakes for a big party and decided on three different Hummingbird recipes, the last of which were the scrumptious Malted Chocolate Cupcakes.

The recipe for these cupcakes are very different to your normal recipe; firstly there’s no butter. I prepared the sunflower oil/egg/buttermilk/etc. mix and the dry ingredients separately; then it was the case of adding the dry to the wet, and poured in some boiling water in as well (why I have no idea!).  Now my best tip would be to NEVER bake when tired. At this point, it was late in the day and I had to double check how much of each ingredient I put in as I kept thinking I put in the wrong amount  – basically I made a lot more drama than was necessary. Oh dear.

These finally went into 30 muffin cases and into the oven (as doubling up the recipe I always manage to get more than 24!).  Once out they were left to cool and smelt exactly the same as normal chocolate cupcakes; something I, for some reason, didn’t expect.

Now, the icing was just as confusing as the baking part of this recipe. There’s three parts to making the icing; first the chocolate chips were melted, while the cream cheese and caster sugar is mixed, and finally the cream and malted milk is whisked to make soft peaks.  What are soft peaks?!?!?! I personally had no idea and made a guess.  Luckily I actually think it was at the right point and managed to mix in the sugar and chocolate together before folding in the cream.

My biggest mistake of the whole day was that I somehow didn’t get enough malted milk (aka Horlicks for those of you who, like me, have no idea what it is), which meant that I could only make one batch of icing instead of two.  After a mini panic attack I decided to make the one batch and hope (and pray) that I could use it for 30 cupcakes instead of 12!

Someone up there was on my side and I did manage to get enough icing on all of the cupcakes; I did put this down to a few family members ‘testing’ some of them and thus reducing the number I actually needed to ice!

The cupcakes were twirled in the trusty Hummingbird Bakery style and 3 Maltesers were put on top for decoration.  Of course I bought enough Maltesers so that it would be three for a cupcake, one for me! 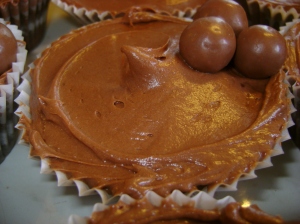 The cupcakes were actually really nice; after doing my standard taste test I realised I actually really liked the taste.  I’m not the biggest fan of chocolate cakes or icing but these were different and weren’t as rich.  I was also a bit worried about the icing because it had cream in it but it was a really nice suprise.

These were the last batch to be boxed up and shipped off to the party.  Time for a well deserved cup of tea I think; better yet, a glass of wine… maybe even a bottle!