I always seem to end up baking for other people, dinner parties or as birthday gifts to friends and family.  My brother however, always seems to get the runts of the cakes, you know the ones I mean – the oddly shaped cupcakes that there wasn’t enough icing for?  Well he complains a lot, especially as he loves my cookies and never gets many.

Unfortunately this week, I only had enough ingredients for the chocolatiest of cookies and he isn’t the biggest fan of chocolate anything.  Ah well, beggars can’t be choosers right?

I started off by melting the butter and half the chocolate over a saucepan of simmering water.  I’ve done this a thousand times with my plastic cake bowl and never had a problem.  This time, I used the new and fancy saucepan, turned around for a minute to chop up some more chocolate and turned back round to find a hole in my bowl… Aaarrghhh!!!

Luckily it the hole was above the chocolate so none of it was ‘contaminated’.  I quickly changed bowls and left the mess to cool and to deal with later.   I held the bowl over the heat this time to make sure it didn’t touch the metal surface of the pan and finished heating the chocolate.

I then whisked the eggs, sugar and vanilla extract and mixed in the chocolate. No catastrophes there thankfully.  I figured, you only get one catastrophe per baking job right? Right?!

Wrong.  When I went to mix in the flour, salt and baking powder, I realised the dough was still really gooey.  I triple checked the recipe to make sure all the ingredients were right and was stumped.  I even put a bit more flour in to no avail.  I finally gave up and convinced they were going to be a wreck anyway, put them on the baking tray and into the oven to cook. 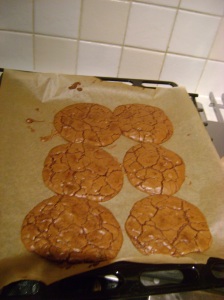 They came out huge but this was because I couldn’t get small amounts onto the baking tray without making a mess.  They were also really gooey inside.  I left them to cool completely and attempted, and generally failed to get them off the greaseproof paper without breaking them in half.  Oh dear.

I couldn’t even be bothered to taste one, and promised I’d try again in the morning if they were that bad.  My dad tasted one and said it was great, although it was really chocolaty.  I thought he was just being nice and put them in the fridge to hopefully harden them up.

I finally built up the courage to try one in the morning and…. WOW! It tasted really nice – really chocolaty – but actually good.  The outside hardened overnight and the inside stayed soft and gooey.  Apart from the fact that the majority of them were broken in half and huge, it could have been shop bough it tasted that great!  My brother came home the next day and ‘tasted’ the rest of the cookies and although he’s not a chocolate fan, he managed to eat them all.  I guess you could say it wasn’t a complete wreck?!