With every new season of  ‘The Great British Bake Off’ I get inspired to bake something new. This season was no exception to the rule and I was determined to bake my first ever pie.  Not any old type of pie, but the now famous Key Lime Pie.

I have to admit that I was grossly unprepared for such a task, to the extent that I went to my local baking retailer and said: “I’m baking a Key Lime Pie, what do I need?” After a look of pure disbelief, the assistant actually managed to figure it out for me and I left with a brand spanking new pie dish and baking beads. I even bought a zester, so that I might be able to zest the limes without injuring myself.

I was ridiculously excited, and immensely terrified at the concept of making pastry … until I got home and realised the Hummingbird Bakery uses digestive biscuits instead.  Ah well. I set my baking beads aside and got started.

The base is essentially just crushed up digest biscuits with butter and is squished into the bottom of the pie dish and cooked for 20 minutes.  Everything was going great but I had a sneaky feeling that my pie dish was too small, I bought the recommended 23cm but it seemed to be a LOT of base for the amount of space there was. 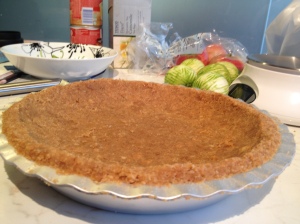 Once baked, I set the base by the window to cool quickly while I got started on the main part of the pie.  This consisted of lots of egg yolks (the whites were swiftly turned into a yummy omelette), condensed milk, and lime zest and juice.

Here is where I messed up.  I started to use my great new zesting gadget and quickly realised that: 1. The recipe says grated. 2. My new gadget was making really big, thick bits of zest.

I didn’t think too much about it at the time and continued to mix everything and pour it into the cold pie crust.  I definitely bought the wrong size pie dish as about a quarter of the filling was left after the pie was filled to the top.  Oops. Afraid to risk it, I set the extra aside and cooked the pie in the oven for about 30minutes.  I was very careful to keep it in long enough so that it wouldn’t be classed as ‘wobbly in the middle’ but also wouldn’t overcook. 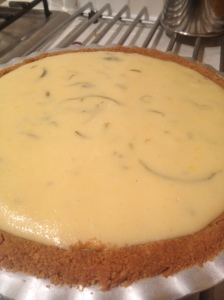 Once out the oven I left it to cool and chilled it in the fridge for 24 hours before serving up with cream and a little more lime zest.

So all that’s left to talk about is the taste. What can I say about this pie that will make you believe how unbelievably tasty it is! There aren’t many words that can express how good it tasted: zesty, creamy, light, delectable … GORGEOUS! Let’s just say that there is a reason the ‘British Bake Off’ judges named it one of the tastiest things they’ve had in the entire programme!