I have three loves in life: music, books, and baking.  Today I got to mix two of them together.

We had a meeting at work today to discuss the amazingness of a book called ‘Pear Shaped’ that will be released in January.  Yes I used the word amazingness people, it’s that good – I started reading it last night and I had to ask my mother to hide the book from me while I write this blog.  And what is it about??? A pudding taster! 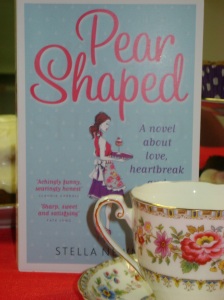 So how did this meeting connect to two of my loves?  Well, we had a great book to discuss and what better way to discuss it than over a nice afternoon tea – each person contributed and baked a cake for the meeting.

I actually had a bit of trouble choosing which cake to bake; I’m still new there so I couldn’t make anything too flashy that screamed ‘show-off’, but didn’t want to make something boring either. After spending way too much time looking at pictures in the books, I finally chose the Hot Chocolate Cupcakes.

These sound a lot more difficult to bake than they actually are; the hardest part of the recipe is heating the milk and stirring in the cocoa powder! Otherwise the recipe pretty much follows the same pattern.  Mix up the butter, sugar, flour, baking powder and salt while the chocolate milk dries; then hand whisk the eggs into the chocolate milk and pour into the ‘dry ingredients’ and whisk.

The batter was a bit runnier than what I’m used to, so you’d think pouring it into the cupcake cases wouldn’t be hard… Wrong.  I somehow managed to drop the bowl onto a few packages of empty cupcake cases, which caused a knock on effect and essentially ended up in right mess.  I had to pour some batter back into the bowl from squished cases, replace them and start again. 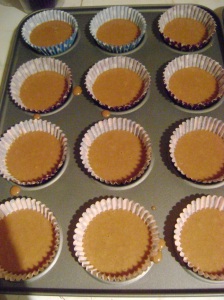 I finally managed to get everything wiped down and clean again; the cupcakes went into the oven for 20minutes and came out smelling like the most amazing hot chocolate.  I got told off yet again for making the house smell too yummy by family members and had to give them warm cupcakes to compensate.

Once the cupcakes cooled I moved onto the icing.  It was now around midnight and I realised that I only had half the amount of icing sugar needed. Typical.  I made do and whisked up the icing.  The lack of icing meant that any fancy ideas for piping went out the window – I resorted to the trusty ‘Hummingbird Bakery Swirl’ with some chocolate sprinkles.

The cupcakes went down a treat at the afternoon tea; in fact all the cakes at the tea party were beautiful. After some strenuous taste testing, I can say that they were all lovely!   There was so much that we also managed to hold an impromptu cake sale for a charity as well. Go team!

I’m not quite sure why but I always seem to end up baking late on Friday nights (not from a lack of social life, however!).  This week I was baking chocolate cupcakes for a birthday picnic on Saturday.

The cakes went into muffin cases and cupcake trays (a deadly mix).  I didn’t want the cakes to blend together again from lack of support, so I put a little less batter in each case than I would normally do.  They came out perfect but hadn’t risen to the top.  One day I will be able to get it right with muffin cases… or just buy a muffin tray.

Then came the icing.  I’m sure I halved the icing as usual but am not sure how I managed to put double the amount of milk in.  Luckily this didn’t actually affect the icing and it came out well.  To be honest I may have just made a whole batch in my sleepiness and thought I had made half.  Who knows?!

The best part of baking for me is decorating the cakes.   Lot’s of blogs I read have beautifully piped roses etc. and I have become slightly envious; so I will be ordering some Wilton nozzles a.s.a.p. For now I made do with some nozzles that I found at home. 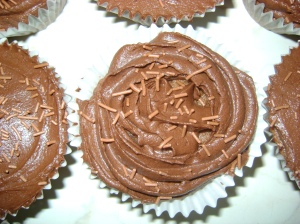 When icing frosted roses; you should apparently hold the piping bag directly above the cake, start from the middle and work your way outwards in a circle.  Sound easy? Not so much.  Some just didn’t seem to want to work, so I swirled them in the Hummingbird Bakery style instead.  Most did sort of work but it’s clear that I need a lot more practice!

I took the cupcakes to the picnic the next day and kept the box straight (so they wouldn’t get squished).  Because of the hot weather however, the icing got a bit, for lack of a better word, gooey.  Seeing my friends attempt to eat them was very funny to watch though.  They were enjoyed by every one and gobbled up.  I normally don’t like chocolate cake and these were very sweet but still yummy.